skip to main | skip to sidebar

I arrived earlier than expected.

I rang the bell. No answer.

I sent a text message to Olivier telling him I was at the door.

I sat down on the front door’s step. Finished the book I was reading.

It was a quick flight.

I walk into the house for the first time. The owners aren’t here.

I meet one cat, then the other.

I think: which one belongs to whom? Which one is similar to whom?

I’m quickly distracted by the ceremony of opening and closing things and explanations and English speaking attempts. I say the least. I stare at the cats. I entertain myself with papers, my agenda.

Olivier arrives. We cordially greet one another. We shake hands.

To know the place. To see the differences between a tiny ID-like picture and a real face. To ask what the house rules are. Talking to my brother on the telephone. Talking about meeting for dinner.

I am handed the sheets of my new bed. I am dressed in the same colours of the sheets. I wonder if it was done on purpose, but then I guess only I would think of something like that.

We sit and talk. My throat hurts unbearably.

The strangeness of meeting someone for the first time.

I ask for the supermarket: 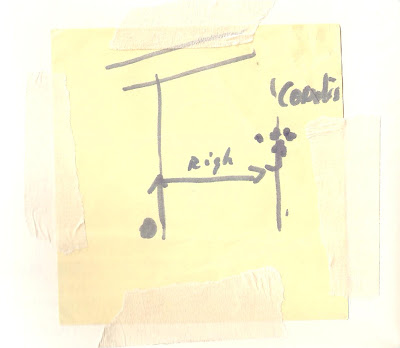 Jérôme arrives. I’m working on my laptop. I readily stretch out my hand to greet him with the reference of the previous greetings. He moves forward to greet me with two kisses. I feel like an idiot. I apologize. We greet one another again.

Again I compare. I look. I look again. I search.

The intellectual, the silent and the sentimental bourgeois. All yet to be confirmed. 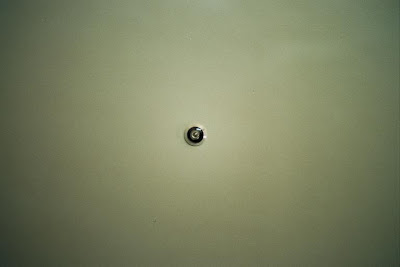 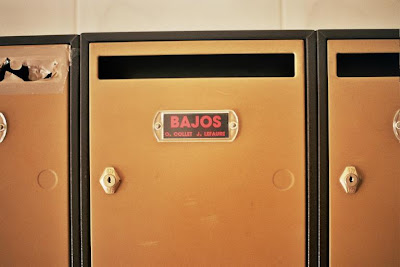 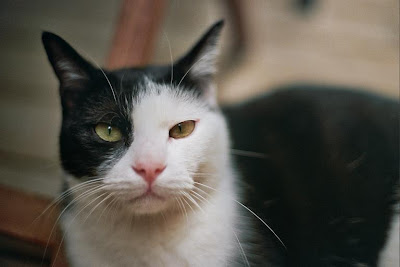 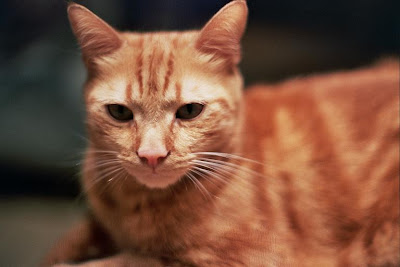 I leave my toothbrush next to theirs. 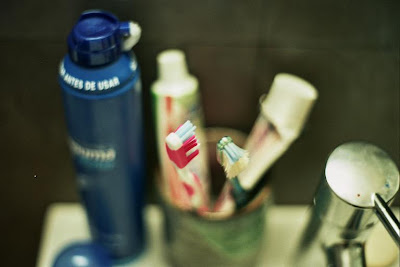 The cats wash one another in the terrace.

I have lunch with Jérôme. 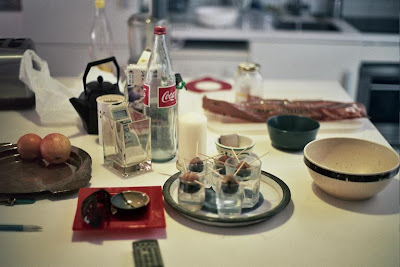 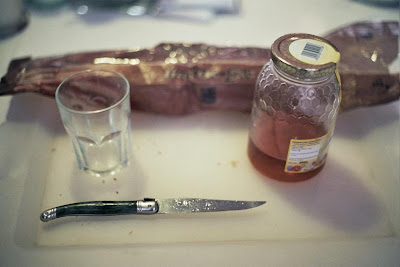 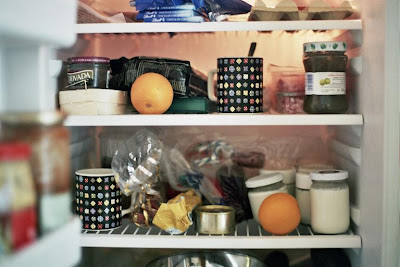 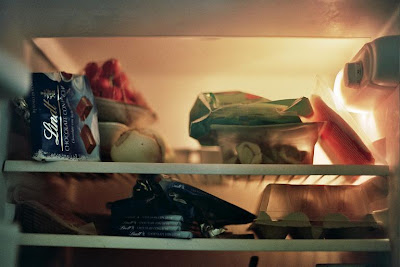 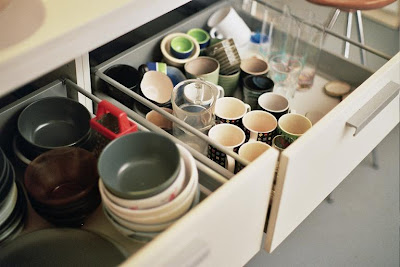 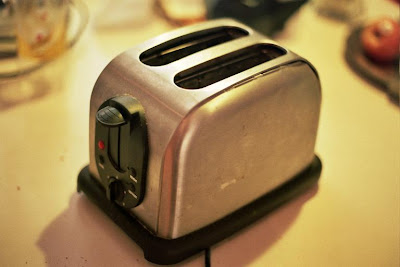 - I phoned him but his phone was off.

I am now part of some kind of connection. 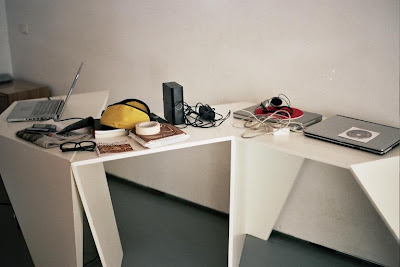 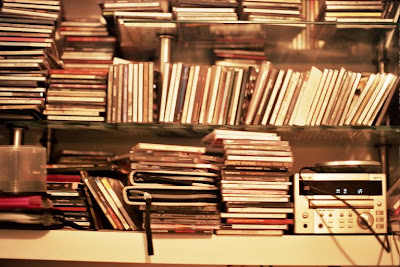 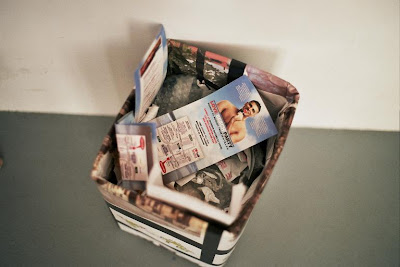 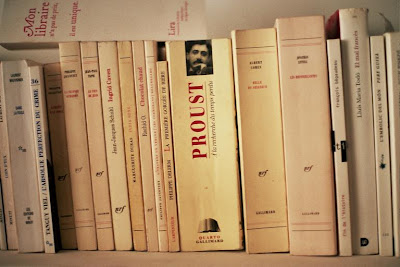 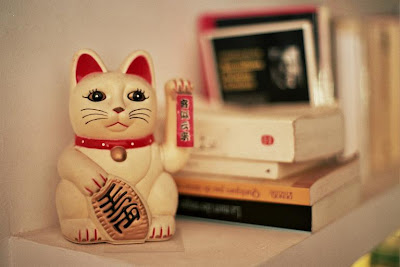 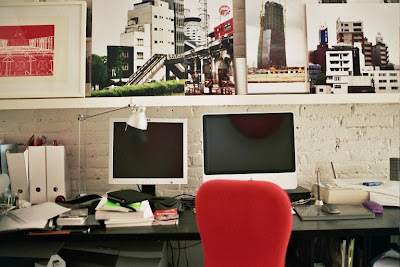 The house is quiet.

I find a cockroach near the desk.

I imagine they hear me come in. That they wake up with the sound of the door. That they follow the small sounds I make.

I get one of the cat’s attention to the cockroach. He smells it but does nothing.

When I come back the other cat is throwing the cockroach from side to side, playing with it.

I drink a glass of cold water.

I now know which cat belongs to whom.

- The bathroom towels were close to each other. They are collaborating with me.

- I left my notebook on the desk to see if curiosity would make them take a peek. I guess they like surprises.

- They have lots of chocolate in the fridge.

I dance looking into a reflex whilst eating an apple. 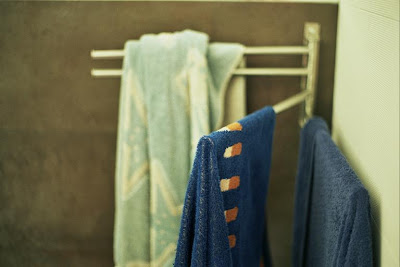 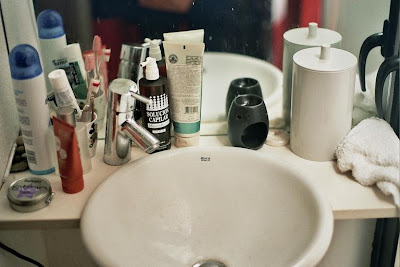 - I sleep with the notebook by my side, on the bed. 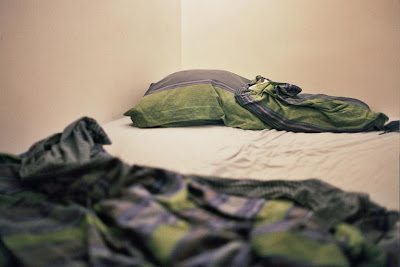 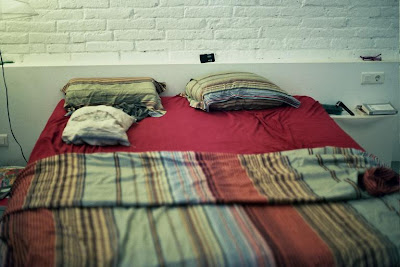 Cat A comes into my room for some investigation.

After that I do two drawings of them, Cat A and Cat D, and leave the drawings on the living room wall. Maybe they’ll think my work begins here. Maybe not.

‘Cat A’ and ‘Cat D’ is used only to distinguish them because both names begin with A – and I decided I wouldn’t fully write any names except for Jérôme’s and Olivier’s.

As Cat D has a Japanese name that wasn’t easy for me to remember immediately – even though it is, in fact, easy – I called him what it first sounded like to me: Daikiri.

Today was our first dinner together. My brother joined us. I don’t feel like describing what we ate or what we talked about. Although there was a moment where a kind of identification spasm took place due to the name Marguerite Duras.

After my brother left I suggested we could watch the documentary on Tracey Emin. We sat down and did so.

I gave them a little bit more information about me.

At on a summer’s night, subtly I reveal more about myself than I expected.

Cat A comes into my room for some investigation.

- I left my white soap next to their blue soap.

- We begin to speak in Spanish.

- They cheer up with wine, or maybe it’s because they know my brother and that makes them feel more comfortable. 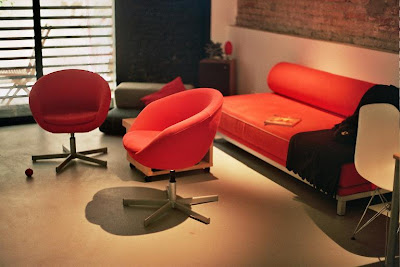 I finally find a place to sit and to begin to write what I think will destroy the work of these last few days.

I got to the conclusion that it doesn’t really interest me to write the time or the events as if they were part of some kind of scientific investigation or study.

I have actually really tried not to interfere in their lives, being as discreet and silent as possible.

I think I’ve been realizing that I am close to the subtleties of the conventions of my good education – which is something that belongs to me intrinsically. Learnt and interiorised. I don’t speak much, I stay in the same room, I wash the dishes after using them, I try to keep things in their place – be it in the bathroom, living room, fridge or my room. I obsessively clean the bath tub after taking a shower until there isn't one hair left. I try hard not to make any noise when they’re asleep.

I ask myself if my small everyday life invasions aren’t monstrous enough. The toothbrush, the towel, the sound of my footsteps, the fact that one knows that at any time a stranger can walk in through the front door with a key. Just the fact that I exist, transforms their lives. The life of that couple, those cats, that house.

So I think of myself in my own house. I think of the resemblance of my behaviour when I’m alone. I try to eliminate the traces of any movement, any stay, any life. As if everything was forever new. As if I could always begin again. The feeling of ‘first time’ – I try to do the same thing with love. The ridiculous idealization of ‘first time’, of being the only one, of erasing someone else’s past, of not wanting to be linked to others through the person one loves because that person is special. As if the rest could ruin everything. As if the rest could get it dirty. Everything becomes Jurassic – the friends, the past, the place one lives in, with whom one lives, what one wears, what one eats, where one goes…

Living with this couple made me recognise and remember my life with R. two years ago. It made me remember my incapacity of dealing with his past. To know about the people – who I consider revolting – he slept with. To be inevitably connected to these people as if we shared a secret. The only thing that actually comforted me was to know that none of them – or any that would come – would do what I did for R. I know no one will ever do.

These connections make me think that we are inevitably small.

I understood that I don’t want to disturb. I want to belong. I want to permeate in the corners of that home. To be part of its everyday life. To be nothing. To be everything. To exist as if I weren’t there, as if they were by themselves.

Maybe they are looking for the complete opposite.

Do they fall asleep quickly or do they stay awake for a while, listening to the small noises I make, the cat’s movements, the tiny pieces of wall that fall off, the water running in the pipes?

Do they sleep hugging?

Do they say something to each other before going to sleep?

Do they always sleep with the door closed?

Do they always go to bed at the same time?

For how long have they known each other?

For how long have they been together?

How are they without a stranger in their home?

Have they thought of getting married?

How many times per week do they have sex?

Do they have sex with other people?

Have they fallen in love with other people during their relationship?

Do they wonder what I do when they’re not home?

What does it mean to be part of a couple?

And am I really being a part of it?

C. teaches me a basic psychology game – think of a landscape, describe it. You’re walking across this landscape and you find a vase. What does it look like? What do you do with it? Keep on walking. Then you find a wall. Describe the wall. What do you do?… 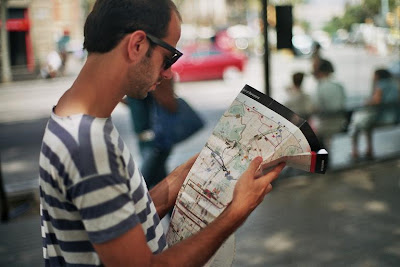 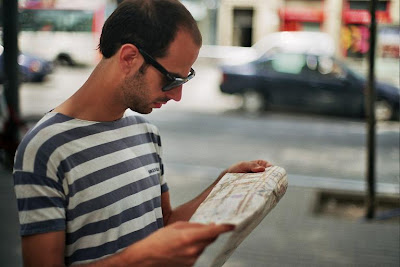 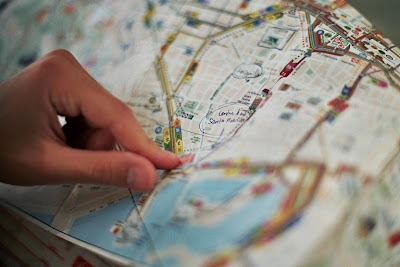 I woke up in a bad mood.

The horoscope for today says: conflicts at home. Perfect.

I’m striving with this diary to make it good, interesting, so that they like it. That was always my concern. Even with the ideas I had before my arrival. I thought of leaving them a recording of my voice. I thought of cooking for them, but I was so ashamed of doing so that it was impossible to even try. I’m not really a chef. Actually I hate cooking and I imagine this doesn’t help at all. I don’t know why I had this idea. Then I thought I could perform in the dark, one to one, in a room. Then I thought it would be better to perform for both of them at the same time.

I always had the idea that my arrival at this house would have some kind of sexual goal - by my own and other's initiative and imagination. Maybe because I know how men are in general, because of this fixed thought of sex as a basic need and of everyone fucking everyone else just because. Call me a romantic or a nun, I still can’t seem to grasp this. And I don’t care about what’s politically correct. If my arrival had anything to do with sexual objectives I’ll never know. 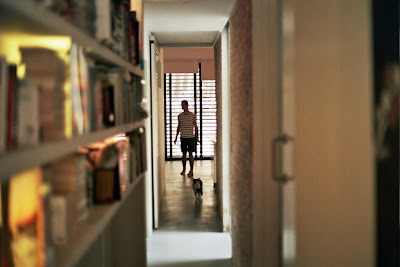 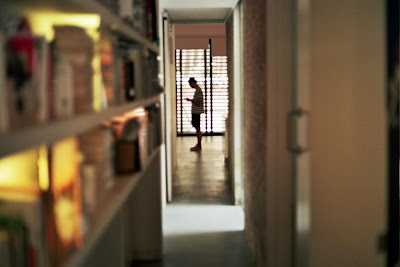 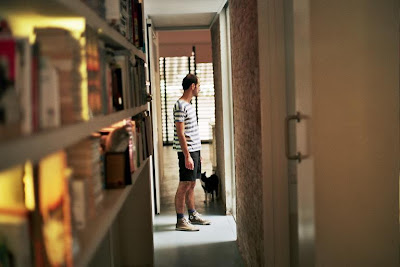 I was tempted to look at the time when I left the house, but I didn’t.

I feel so ashamed of my bad mood, ashamed of being able to afford the projections of my frustrations and anxieties on others, ashamed of my Truman Show paranoia. I feel small and ridiculous.

Now I am half way to my real home, to the home I call my home. The home I shared with R.

Maybe that is the cause of the anxiety of these last few days. That relationship, that life... Yes, maybe it was the cause of my irritation. Maybe it’s because I don’t understand how one can live 6 years under the same roof with someone else and because I don’t know what secrets they hide. They remain together. They exist. Maybe this conscience will help me get through the idealisation for good. The next step will be to exhume, exhume, exhume myself.

At on the 13th of August the house was silent so I could peacefully say goodbye.

This work was made during a residency at Homesession, in Barcelona. All photos by Cláudia Varejão except Jérôme & Olivier's photo by Miguel Bonneville. Interview by MB and Homesession. Special thanks to my brother, Cláudia and Vasco.